RRPGE is a new emulated game oriented microcomputer design, built to bring back the era of the early 90's while integrating seamlessly into today's technology. The whole specification and the reference implementations are open, by the spirit of GNU GPL.

Technology-wise the system composes from unique virtual hardware components, designed in ways to assist high performance emulation, so even old computers and low-end devices may be capable to run games designed for it.

Why exactly the 90's? This was the golden age of 2D visuals with some early excursions towards 3D technology, while systems already had decent power, capable to run complex software with greater expressive force than before. More importantly this was about the last age when small groups with minimal or no budget were capable to release notable pieces, who are exactly the primary target developer audience of the RRPGE system.

The packages contain everything to get started (emulator, assembler, examples with sources, and the RRPGE system specification). The 32 bit binary for Windows works on 64 bit Windows proper. To just try it out, open the examples directory, and (in Windows) drag & drop the examples on the rrpge.exe program to start them.

Keep in mind that this is an alpha test stage, the specification of the system so may change. Changes in the CPU are extremely unlikely, however the accelerators may encounter minor changes in features, while their register layout might be shuffled around as I further experiment with their most efficient utilization. Later I will set milestones at which points one or another of these key components lock down for further modifications. If interested, just try out the system, experiment, and feed back! It can contribute to realize the most efficient system.

I am finalizing the fundamentals of the design to get to a point where it is possible to realize game construction tools on the system. Then some basic utilities will be prepared on this ground to show off more of the capabilities. A later, but not too distant plan is to create a web based emulator so the system and probable games may be tried out without downloading anything.

Currently there are only simple example programs to demonstrate the features of the system. They look better in motion, however, here are some static screenshots to get the mood. These are all included in the example application package, source included.

Sprites and other stuff waving and moving around, mostly produced by the graphics display generator. 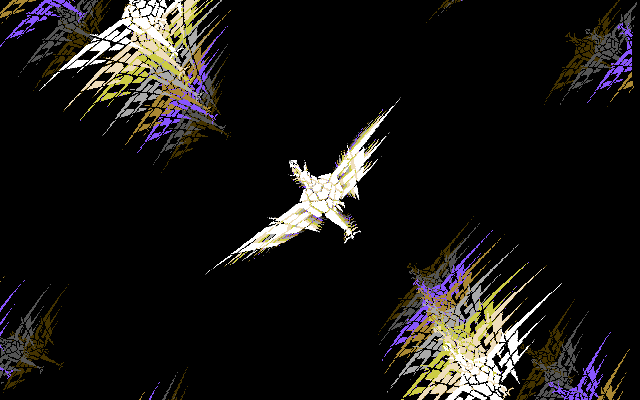 A rotozoomer showing the utilization of the graphics accelerator. This runs with about 19 FPS, 640x400 is a bit expensive at full screen for this type of accelerator use.